It’s 6:40 am and I’m waiting for the next bus, having missed the last one by seconds.  It’s been that kind of a week: a stomach bug combined with January blues/end of term apathy.  I’m hoping this day gets some zing to it – after all, it’s my blogging initiative

kick-off! – but on a cold Friday when you’ve been sick, well, some teacher days are just like that. Best part of early morning commute:  quiet.

Today is staff college pride day; I don’t actually have garb from my own alma maters so I am sporting a Rutgers t-shirt, with a large red R emblazoned across the chest (ubiquitous on campus) for Marilyn,  layered with a modest grey sweatshirt with the artfully quiet MICA logo, for Geo.  In case you’ve never read my blog before, I’m pretty proud of both of those kids and their educational accomplishments.

Two relatively brief bus rides and I’m at school.  The sun is up (almost), and I’m looking forward to my first Algebra 2 class; they’ve been a great group to start my day with this term – hard-working and always willing to try.  Plus they get my jokes, such as they are. You can’t ask for much more than that at 8 am.  I’m going to try my best to spice up higher degree polynomials for them.  A puzzle? A game? Card sort?

Once I’m in my office, with 35 minutes to the first bell, I decide re-inventing today’s lesson is not the best use of my time; I’d rather take the opportunity to open the floor to some college-bound conversation.  I cue up a range of animations that Geo has produced

at MICA; I know on a Friday morning, the students will find watching them a treat (as will I).  I head down to the classroom with my trusty cart-o-supplies (bottom left of photo), looking forward to the cheery greeting I always get from the early crew.    I treat the early-comers to a brief animation – Geo’s work with scientists from NASA working on the Fermi Telescope.

As the kids pile into the room, they begin pulling out the tasks that are due today, and comparing work.   I’m excited to see what they’ve done with this assignment – I’ve named it “Jeopardy”; I supplied four answers with accompanying topics – they need to write the questions.  I’m looking forward to blogging about this after I’ve gotten a look at their work.

They settle down, and the lesson begins.  It’s not a favorite of mine – reviewing a lot of procedures for finding the roots of quadratic functions and applying them to functions of higher degree – but the kids need the review, and to be honest, I’m not up to a super creative discovery lesson after this week.  I’m pleased to see the students working together, going through their notes, and synthesizing the many bits and pieces relating to functions as we work through examples together.  They are, as I have said, a good-natured crew, and I make a mental note to do something nice for this class to thank them for starting my days well this term.

With a few minutes to spare in the period, I briefly share my educational resume – the school I most recently attended (Pace University) and those not so recently, SUNY Albany and Columbia.  I spend more time telling them about MICA and the Mason Gross School of the Arts at Rutgers; I think it’s as important for them to hear about creative fields in education as it is for them to think along specific career paths.  And I give them one more video.

The next class is pretty much a repeat of the first, although my third period students are a little bit more serious than the previous bunch.  I don’t know if it’s the hour, and they’re more ready to work, or the children themselves.  This class does benefit from my running through the lesson once already – even though I’ve taught these lessons before – we may, on occasion, dig into the content in greater depth because of this.  Predictably, perhaps, however, my relationship with the first class is warmer.

After the first 2 classes, my teaching day is 40% over.  And it’s only 9:40!  (Isn’t math grand?)  I have a double period free, which allows me to really dig into grading, work with students, read, plan – whatever the order of the day is.  Today,  some logarithm exams beckoned during the first half of my break .  I was pleasantly surprised at how well many of the students did on the extended response portions of the exam, and how efficiently the grading went.  Such will not be the case with the aforementioned task;  a creative assignment SHOULD MEAN widely different submissions, requiring a lot of individualized grading.  My rubric will hopefully stand me in good stead.  During the second portion of the break, my two monitors, Rachel and Tiffany joined me.  These girls are juniors in one of my Algebra 2 classes.  They are both transfers from another high school, and lovingly do whatever task needs done –  updating iPads, taking things out and putting other things in to page protectors, picking up photocopies, and cutting worksheets with the paper cutter (this is, interestingly, their favorite…)

.  They never take advantage of the fact that they are in my office and have access to – well, everything, and they are as reliable as the day is long.  I miss them when they have lab on Wednesdays.  Today, after the requisite errands, they asked me to look at their exams.  We went over them together, and while they were not 100% happy with their own performances, they characteristically did not try to exert undue influence.

The other 60% of my teaching load occurs in a long block after this break.  I teach two classes of Problem Solving, and finish the day with one more section of Algebra 2.  I’ve written mostly about the Problem Solving classes this term; my relationship with them is, sadly, frequently unpleasant.  With six days in the term to go, the students were working on a problem set utilizing the strategy “Identifying Sub Problems”.  In an effort to elicit original work from everyone, there were four versions of the worksheet (similar problems, different numbers).

Attendance has dwindled severely in these classes, but those students who are coming to class are working – many in an effort to keep their grades above 65.  Most of the students who are working require a lot of support, which I am happy to give.  I won’t reiterate my disappointment with the classroom culture that has evolved in both sections, although there is a perceptible difference between them.  In the earlier class, despite my frustration with the work ethic I have not been able to elicit from the students, I have a fairly open and honest rapport with many of the kids, and there is, ironically, mutual appreciation and affection.  The students know that my behavior in the classroom comes from a belief in their native intelligence and a refusal to let them off the hook regarding what they might claim is a lack of ability.  And even though they might wish I would give them a passing grade and leave them alone, they respect my appraisal of their intelligence; many, many teachers do not give them that benefit of the doubt.  However, this is not the case with the students in the later section of the class.   I have not been successful in getting many of these students to shut off their phones, do their own work, or accept my guidance.  I know many of them think I am unfair, and plainly, a pain in the ass.  I’m not going to belabor it any more.

My final class of the day – another section of Algebra 2 – has a different flavor than the morning sections, and affirms my belief that high school math classes can be most successful before 11 am.  They are an engaged group of students, and work well together, but the energy level in the room after lunch time is not always well suited to deep mathematical thinking, especially on a Friday.  We talked at the start of class about college options – this class actually questioned me about the sweatshirt I was wearing before I introduced the topic.  The kids were very interested in the creative paths my own children took – after all, they (my progeny) had a math teacher as a parent, went to well-respected public high schools in New York City, and were making their way with artistic rather than professionally oriented majors.  I loved the thoughtful looks on my students’ faces as they asked questions and digested the answers.  Afterwards, they worked their way steadily through the lesson described earlier in this post (oh too many words ago) in order to watch Geo’s JuniorThesis animation, definitely posted here before.

I finished my day at school bubbling in my attendance sheets, grading a few more exams, and checking in with my new colleague who is struggling with a tough program – a lot of slower track Algebra 1 (who thought four terms of Algebra 1 would be a GOOD idea for ANYONE??) and some off track seniors.  She came from a very rough high school, so this placement may be less stressful, but she’s definitely not been given any slack in her course load. Politics sucks.  I made sure my supplies were on hand for Tuesday’s classes, and closed up shop in the Bat Cave, as my office is affectionately called.

I actually made it out of the building at a reasonable hour, savoring the start of the three day weekend, and contemplating the long view of the last week of the fall term.  It’s been an intense one, personally and professionally, and to be honest, I can’t say I’m unhappy it’s almost over.  The good thing about teaching – we get do-overs every term, every week, every day.

If you’ve read this far, well, thanks for sticking through it with me – a day in the life of this teacher.  It’s a ridiculously long post, I agree – but it only reflects the nature of the work.  How does that saying go – you don’t have to be crazy to teach, but it helps?

And here’s a animation for YOU!

Some of the Blogs I Read 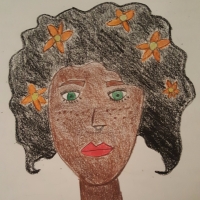 Crazy quilts are unique and innovative quilts created from scraps of material. They're crafted from odd pieces that don't always match or fit together without the work of an artist. My hope is for a world that values this unique artwork. I blog to make IPOC authors and their works more accessible, to make all the pieces fit together.

Books, History, and Life in General

We Are Kid Lit Collective

Because summer reading should be for ALL the people.

A daily glimpse into my classroom

A photo a day from my classroom

Thoughts about math, education, and the world through the lens of a teacher.

An accomplished novice wonders about the challenges of depth over breadth. For musings on parenting and technology, check out bedtimebits.wordpress.com

Be well, be edified and enjoy!

Let's Hug It Out with Math

A blog about teaching, reading, writing, and parenting.

A quick snapshot of each day using code.org's curriculum

The Official Blog of the NYC Department of Education