When I was planning the unit on congruence for my Geometry classes, I wanted some new activities to introduce the triangle congruence shortcuts to go along with the hands-on discovery approach I am using in this course.  We are not doing formal (2-column) proofs, so I am working on eliciting verbal justification from the students.  I combed through the notes I had saved in Evernote (thank you, Anna!) and came across this post by the ever-inspiring (and challenging) Fawn. Her discovery activity for the congruence shortcuts was exactly the approach I wanted to use, especially the part about avoiding lecturing.

The straws which were originally earmarked for stellated icosahedra seemed perfect for our triangle sides ( Fawn used barbecue skewers but they had pirate sword fights as the least objectionable activity in my classroom written all over them), and since my students are not adept at copying angles, I created some angle templates for them to use.  I attempted to debug and envision the activity as thoroughly as I could, using in-house counsel – my 23 year old daughter, who, although in graduate school, remembers her high school days very well.  In truth, I was not confident that the activity would succeed this

morning, but I was determined to go ahead and see what my students would make of it; I wanted them to engage in this very open-ended process.

The first class is always a little sleepy; many students have a punctuality disorder.  That said, they are good-natured about trying new things.  They did agree on the SSS shortcut, but didn’t come up with enough evidence to support their claim.  My third period class, after a slow start, dug into constructing triangles with the straws, and we had a lively discussion about the minimum congruence requirements put forward by the different groups:  2 sides, 3 sides, 2 sides and 1 included angle, 2 sides and 2 angles.  However, I was still not able to push the students towards providing solid evidence.

The big disappointment came in my fifth period class.  This class – my hugely mixed bag of emotional, language and learning issues – is capable of great enthusiasm and conversation; my challenge is channeling it towards the content rather than everything else they would rather talk about.  But the week before the holiday break is a tough one – emotions are high and distraction is everywhere.  My co-teacher and I could have 2 clones each and the room would still need more adult presence (basically, each of the 8 tables could use a teacher).  Of late, I am detecting undercurrents of tension, bromance, and harassment, and phone use is rampant.  I confront unacceptable behavior and language decisively and publicly whenever it appears, but there’s too much going on simultaneously in that room.  I know the students are learning geometry, and I know many of them want to learn more.   But teaching them, many days, is an uphill and exhausting exercise.  Today was one of those, although to their credit, the straws were mostly used appropriately.  After a chaotic attempt at discussing the results of their exploration, I put the notes for the S.S.S. and S.A.S. congruence shortcuts up on the SmartBoard and stopped talking.   At least they were writing while socializing.

Looking at these pictures, it appears that discovery is happening.  But I was disappointed in the results that my efforts produced.  I want to try this activity again next year – I am convinced it is worthwhile – but I’m unsure of how to modify it for greater success without giving too heavily-handed direction.  And I’m unhappy about the scene in the 5th period class, although a week ago, I remember being pleased at how well many of the students were working together.  It seems that the specific attendance on any given day greatly affects the classroom dynamic.   And, honestly, I think by the time I figure it out, the term will be over.

Good thing that every day at school is a do-over.

Some of the Blogs I Read 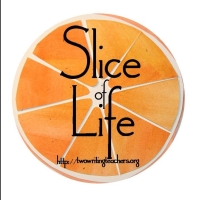 Books, History, and Life in General

We Are Kid Lit Collective

Because summer reading should be for ALL the people.

A daily glimpse into my classroom

A photo a day from my classroom

Thoughts about math, education, and the world through the lens of a teacher.

An accomplished novice wonders about the challenges of depth over breadth. For musings on parenting and technology, check out bedtimebits.wordpress.com

Be well, be edified and enjoy!

Let's Hug It Out with Math

A blog about teaching, education, and professional life

A quick snapshot of each day using code.org's curriculum

The Official Blog of the NYC Department of Education